Newcastle returned to the top of the NYC ladder thanks to a 64-16 demolition of the North Queensland Toyota Cowboys at Hunter Stadium tonight.

All of the North Queensland under-20s’ points came in the second half after they trailed 34-0 at half time.

The Knights, who scored 11 tries all up, crossed twice in the opening 10 minutes to quickly establish a 10-0 lead and didn’t look back from there.

Centre Chance Peni scored the first in the set after NQ failed to clean up a downfield kick and second-rower Lachlan Fitzgibbon ran 30 metres, defying two attempts to knock him over the sideline, to touch down in the corner for the second.

To compound their poor start, the Cowboys had prop Viliame Kikau put on report by referee Brett Suttor for a shot on Newcastle fullback Sione Mata'utia as he tried to take a high ball.

With the Knights successfully completing their first 10 sets, and their opponents battling to offer any stern defence, the third try came with 16 minutes gone – winger Braden Robson capitalising on a stagnant Cowboys line.

Before North Queensland had a chance to touch the ball again, the lead zoomed to 22-0 via forward Harry Pondekas and halfback Jaelen Feeney made it 26-0 with a solo effort with 14 left in the half.

After a brief period of relief where they challenged the Knights’ tryline for a few sets, the Cowboys conceded a sixth try just before the break to Pride Petterson-Robati, who crossed untouched on NQ’s right edge.

Donovan’s fifth conversion put his team, which was a perfect 20 from 20 in possession, 34-0 up at half time.

Although the Cowboys managed to score first in the second 40 thanks to a barnstorming run from prop Michael Barclay, the Knights soon hit back with Pondekas finishing off a move that started in their half.

NQ centre Conor Carey then made it three tries in the first nine minutes after the break and Kikau hit and spun his way over for his team’s third of the match to reduce the gap to 24.

After a much more even half hour of footy, the Cowboys lost Queensland under-18 representative back-rower Coen Hess to a leg injury in the final 10 minutes and saw their points against tally mount with four more Newcastle tries, including a double for Feeney.

The heavy loss dropped the 13th-placed Cowboys to a 5-9 win-loss record. 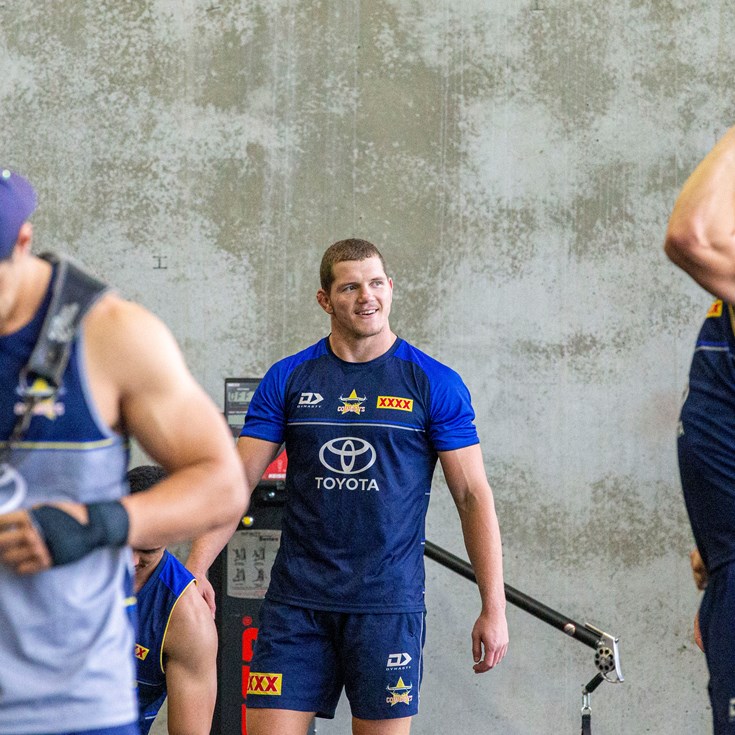