The NYC Cowboys ended their three-game losing run by leading all the way to beat Canberra 44-30 in the round 11 match at GIO Stadium today.

The Cowboys, trying to move up from 14th place on the ladder, skipped away to a 26-6 lead after 35 minutes only to concede two late tries in the first half to allow the Raiders back into the contest.

However, they managed to regain their momentum in the second 40 to record their fourth win of the season, three of those coming away from 1300SMILES Stadium.

With all the possession early on, a short ball from Cooper Bambling put Conor Carey in for the first try of the match before Yamba Bowie, starting at fullback for the first time after impressing in his debut last weekend, broke clear and gave Rainer Power a clear run to the corner.

The lead went to 14-0 thanks to a barnstorming run up the middle by Fijian front-rower Viliame Kikau in the 18th minute.

It could have been worse for Canberra had Coen Hess, who was a constant threat on the Cowboys’ left edge, not lost possession over the line in one of his forward charges.

The Raiders’ first try came thanks to a 10-metre run out of dummy-half by hooker Dylan McGrath, but the Cowboys scored the next two four-pointers – a close-range effort by Dan Clarke and Carey’s second, off a Clarke pass – to surge 20 points clear. The game changed with Canberra’s two late first-half tries, both of which came down their left-hand side.

The second – to centre Jack Creith – following a chip kick with just eight seconds to go was a particularly sour way for the Cowboys to end off their half.

Creith’s second, after Lenny Magey missed an intercept chance and the ball rebounded to the Raiders, eroded North Queensland’s lead even further just after the break.

Now only up by four points, it was a 75-metre intercept try by NQ winger Scott Schulte that stopped Canberra’s surge and started another great period for the visitors.

Alex Grant boosted the lead with a four-pointer out of dummy-half, the play after David Munro had beaten four defenders in a charge from 20m out, and Coen Hess sealed the two points when he was put into a hole by a Bambling short ball.

Although the Raiders, who were their own worst enemy with 12 handling errors, including seven in the second half, scored in the final minute, the Cowboys were deserving winners. 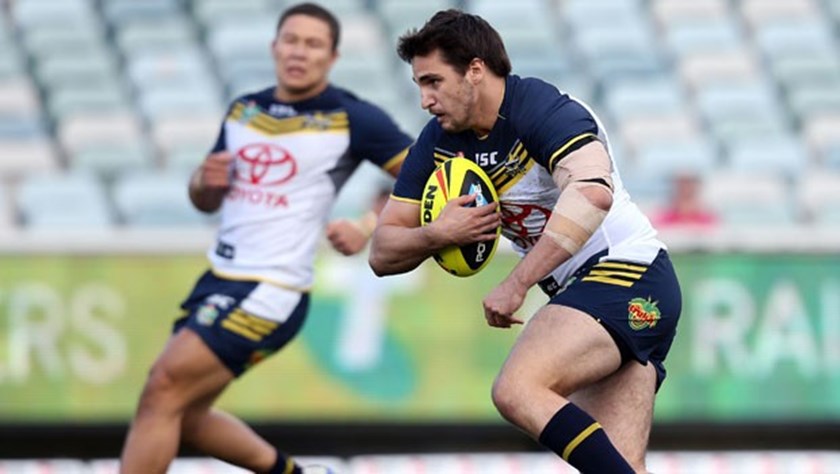 Hess: There is a lot of healthy competition