A memorable 27-14 win in front of more than 21,000 members and fans was sealed by a late Johnathan Thurston field goal followed by a final-minute try by hooker Rory Kostjasyn.

The inspirational Scott totalled a whopping 235 metres in attack – 101 metres more than the next best forward on the field, fellow Test prop James Tamou.

The Cowboys, who have climbed to sixth on eight points, have now won two games straight heading into a home clash with reigning premiers Sydney Roosters next Saturday night. 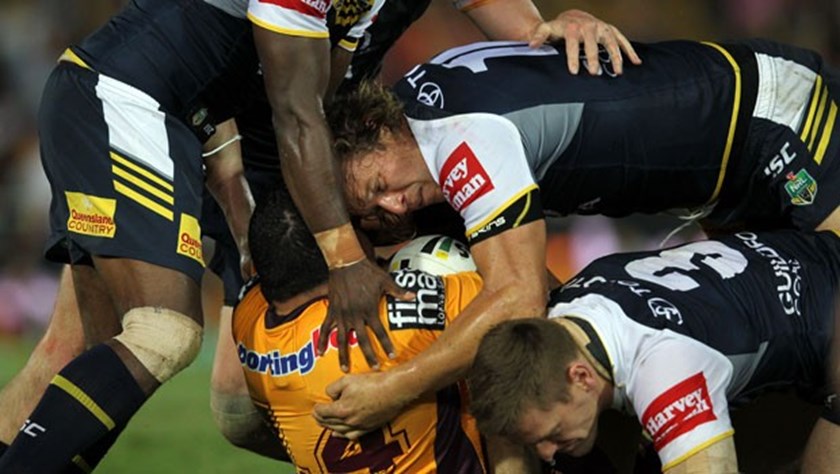 Injuries cost Tariq Sims (ankle) and Ray Thompson (knee) their places in the Cowboys squad. Scott Bolton came into the starting team to replace Sims, with Ethan Lowe added to the bench. Robert Lui was recalled as Johnathan Thurston’s halves partner. The Broncos left back-up hooker Jake Granville off their interchange bench, opting to go instead with forward Todd Lowrie.

The Cowboys were outstanding in the first 40 minutes, especially in attack in the opening 20 and in defence in the 20 minutes that followed.

They could have gone behind early had fullback Michael Morgan not pulled off one of the tackles of the season to hold up Kangaroos back-rower Matt Gillett as he surged over the line.

After that amazing one-on-one effort, Gillett returned serve, holding up the Cowboys No.1 as he looked bound for four points.

Then it was Matt Scott’s turn to shine.

A bust up the middle of the field was followed not long after by the co-captain’s record-breaking third try of the season, storming on to a Johnathan Thurston inside ball to give the Cowboys the lead.

Thurston kicked the conversion and added a penalty goal to make it 8-0 before Morgan returned to centre stage.

He sliced through the Brisbane defence just inside his own half and sprinted 50 metres until finding Kane Linnett surging through in support.

The centre collected his third try in two games and set up a 14-0 lead with Thurston’s conversion.

In complete control, the Cowboys copped a setback when their champion five-eighth walked off the field following a heavy collision with Brisbane winger Dale Copley just after the midway point of the half.

He eventually returned two minutes before the break with NQ’s 14-0 lead intact thanks to some terrific defence, especially on their own line, and impeccable handling.

Scott’s outstanding first stint yielded 110 metres before he came off for a well-earned rest and he added another 29 metres in a few minutes to end the half. 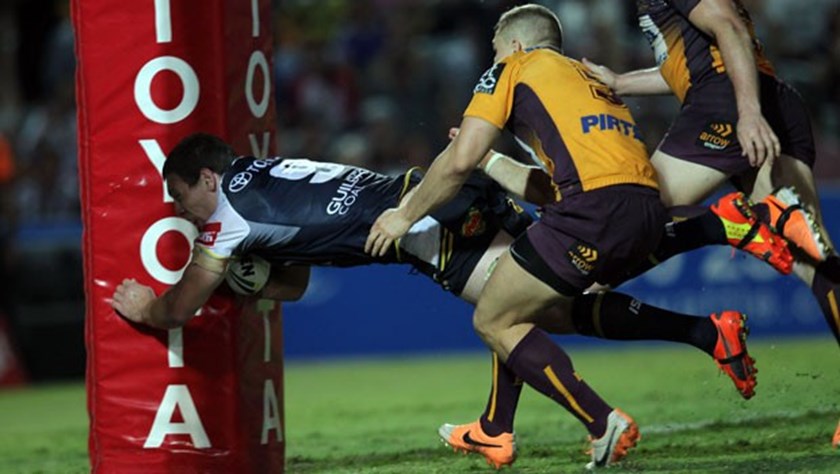 Morgan did all he could to deny the Broncos their first points again early in the second half.

With the help of Curtis Rona, he chased down Daniel Vidot after Jack Reed had intercepted a Thurston pass near the Brisbane goalline.

After travelling almost the length of the field in one play, the Broncos scored in the next with halfback Ben Hunt making the most of a numerical advantage to get across in the corner.

Reed bombed four points not long after when he was clearly first to the ball but was unable to ground a perfectly placed Ben Barba kick ahead and the Cowboys missed out on two as Thurston’s boot was astray from 30m out.

It was the Broncos who eventually scored next – Hunt grabbing his second when he went by himself to score in the 61st minute after a period of sustained Brisbane attack.

Corey Parker’s conversion brought the visitors to within four.

Scott’s huge night continued with an offload sending Robert Lui into the clear.

The halfback could have found support on either side to score but died with the ball.

In the end that missed opportunity didn’t matter.

The Cowboys crossed in the next play, a JT pass sending Ethan Lowe over in his first NRL fixture of 2014.

In a frantic finish, Copley pulled four points back for Brisbane with five minutes left, Parker’s conversion attempt hitting the post and coming back into the field of play.

Thurston sealed the win with a 77th minute field goal that glanced in off the right upright and there was still time for Rory Kostjasyn to plunge over following another Lui bust.